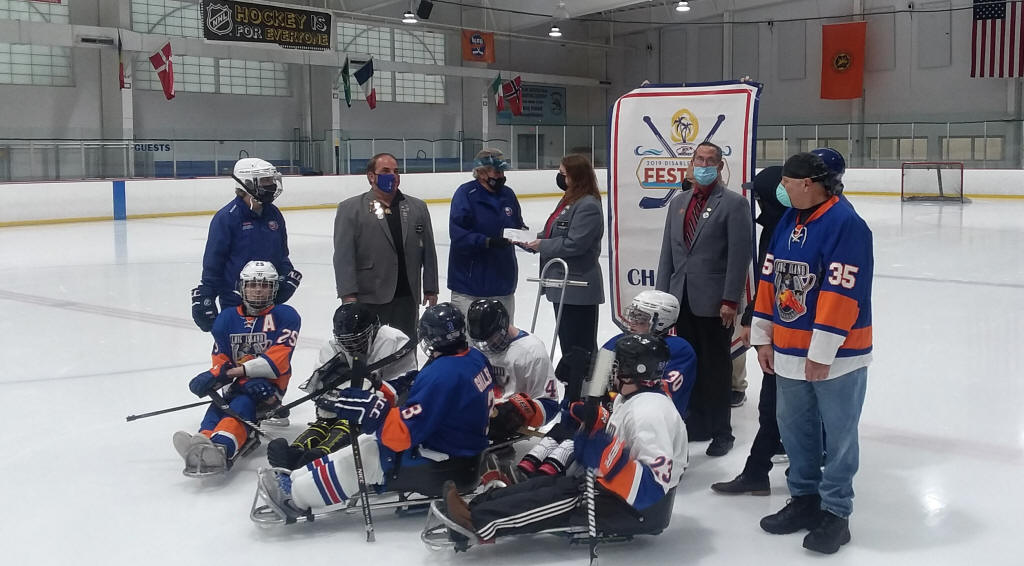 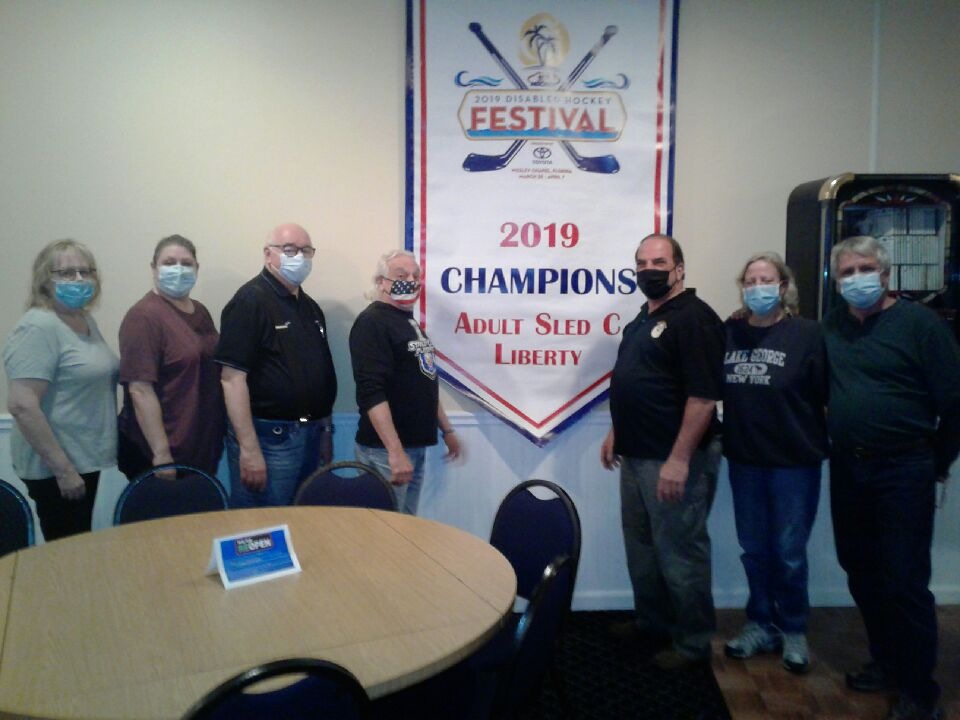 The continued support of Lynbrook's Elks Lodge also culminated with the RoughRiders presenting their 2019 USA Hockey National Championship Banner to the Lodge and it is displayed proudly hanging in the lounge at the Elks Lodge.  Thank you Lisa, your Board of Officers and all brother and sister Elks. 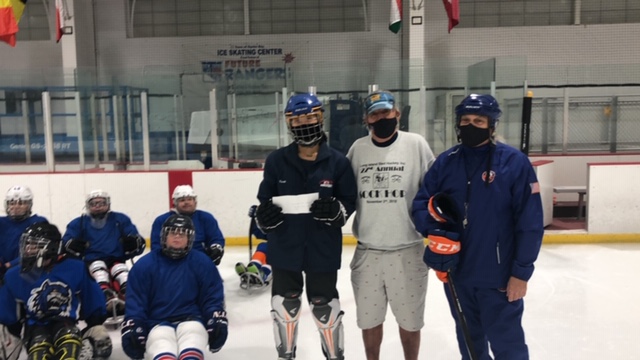 17 year old volunteer Faith Lee (standing left) present a check for $1000 to LISH from the three week sales of HER book, Stories from the Sled; written and published by her, with ALL profits going to the special athletes of LI Sled Hockey. Books can be purchased on our Home Page under Bulletin Board.  Faith, you are an incredible young lady and we thank you!!!

Nassau County Bar Association WE CARE FUND  presents LISH President Bryan Blomquist with a check for $6,000 to help defray the ever-growing cost of equipment for the 51 special athletes who make up the RoughRiders.

Westfield,  Massachusetts - just 21 days since their National Championship,  the RoughRiders post another undefeated weekend and win the 2019 New England Invitational Sled Hockey Championship. Upon their charter bus return to New York, the Lynbrook NY#1 Elks Lodge showed their pride with a timely sign out front of the Lodge. 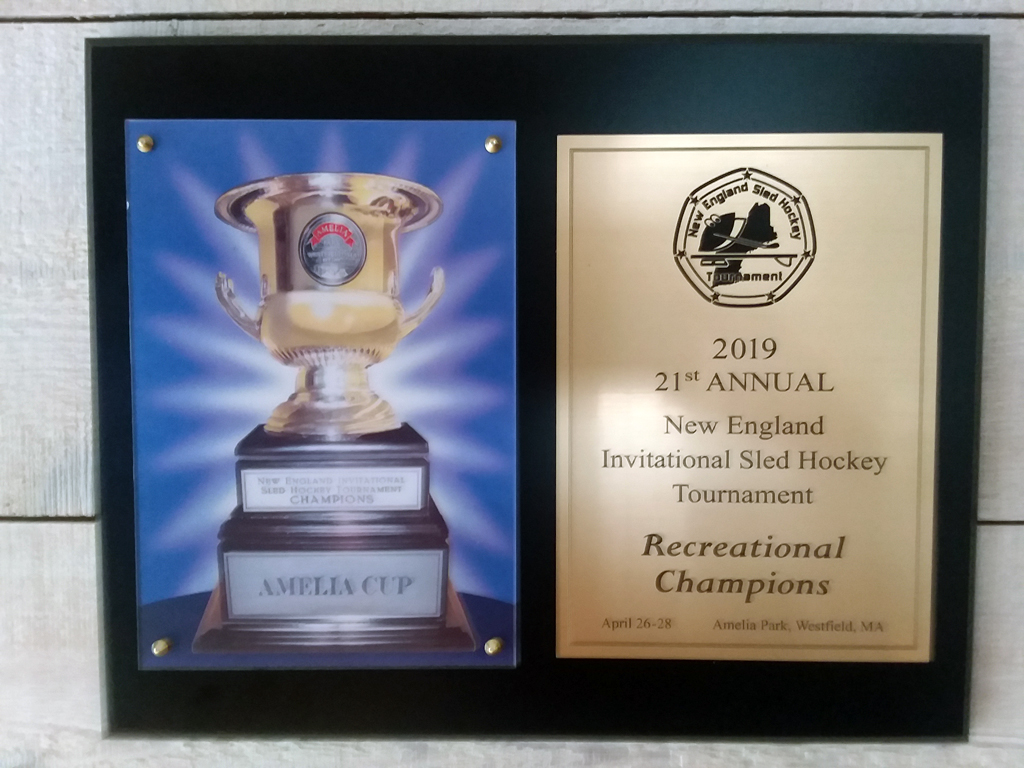 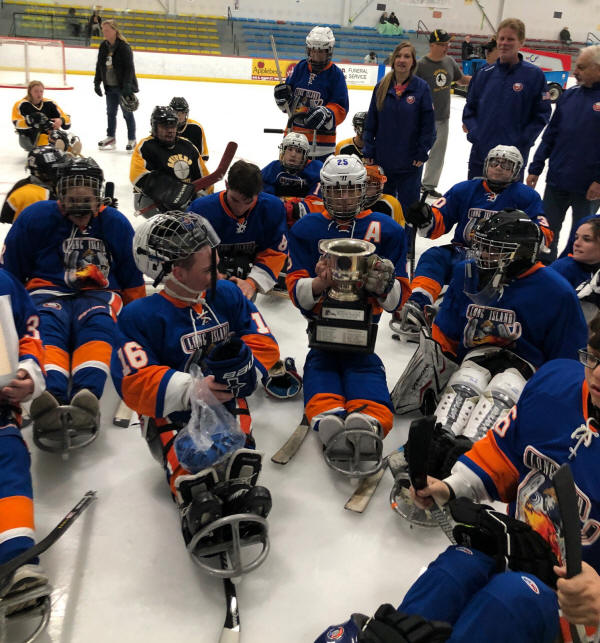 Tampa, Florida - the RoughRiders proudly surround their 2019 USA Hockey Liberty Division NATIONAL CHAMPIONSHIP banner - their FIRST-EVER National Title. Pictured alongside is the banner being held by LISH President Bryan Blomquist and Head Coach Phil Derenze,  along with Board Member of BPOE NY#1 Elk's Lodge,  a lodge which has steadfastly supported the remarkable and special athletes of Long Island Sled Hockey. 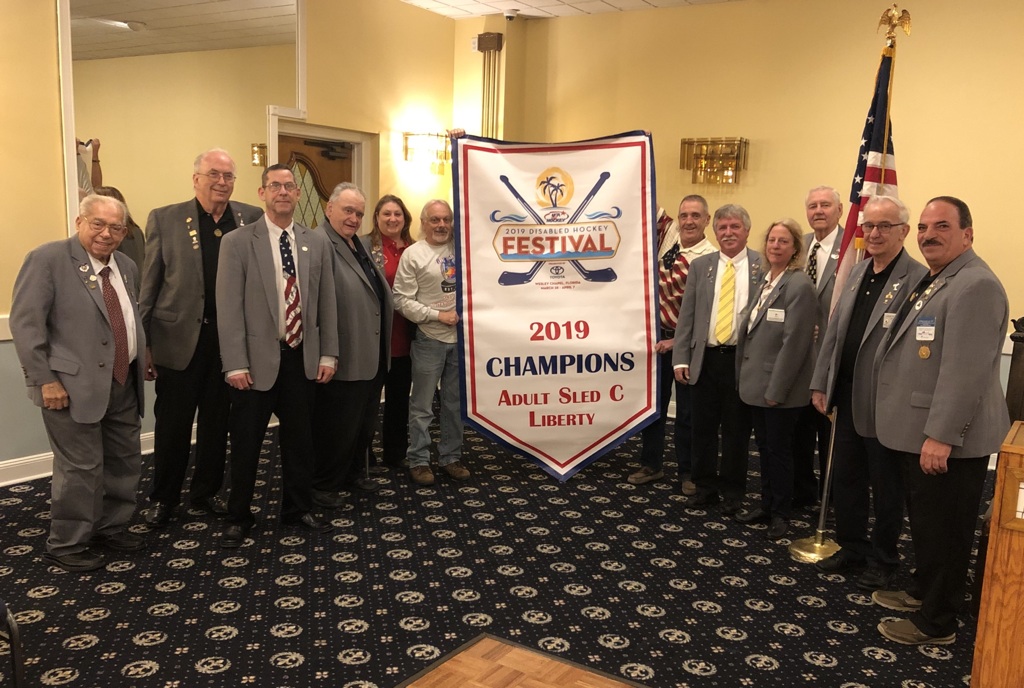 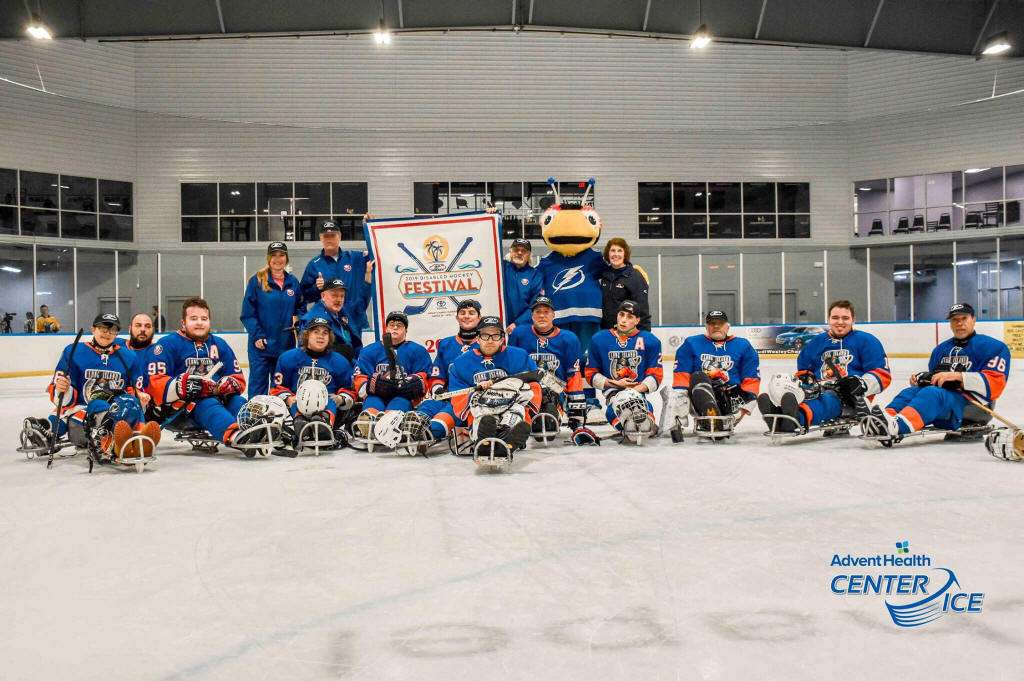 Staten Island, NY - the RoughRiders, for the 10th straight year, played the St Peter's Boys HS Varsity Hockey team, a fundraiser run solely by these high schoolers, raising $90,000 in the prior nine years!!!  A special presentation was made to Coach Blackburn of St Peter's: a custom Cup, with all the players and coaches over 10 years engraved around the Cup. As Coach Blackburn now battles pancreatic cancer, the RoughRiders have rallied around him and support his fight.  We vow to ALL be back for the rematch in 2020!!! 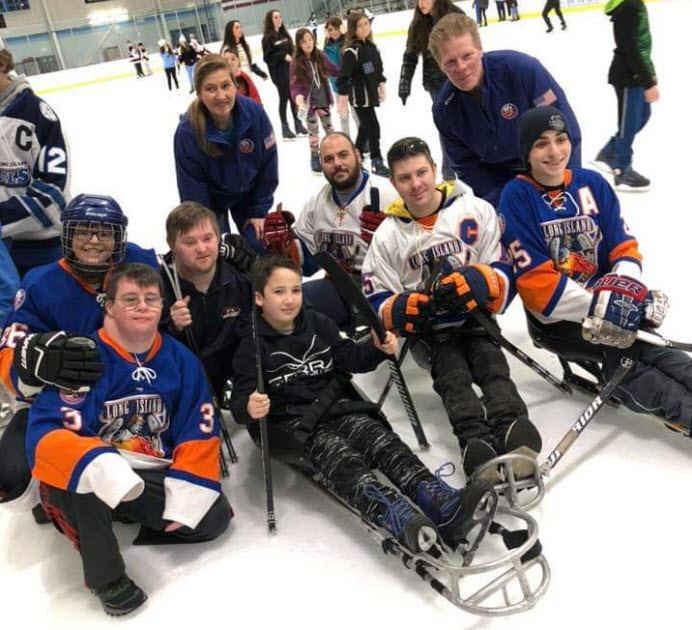 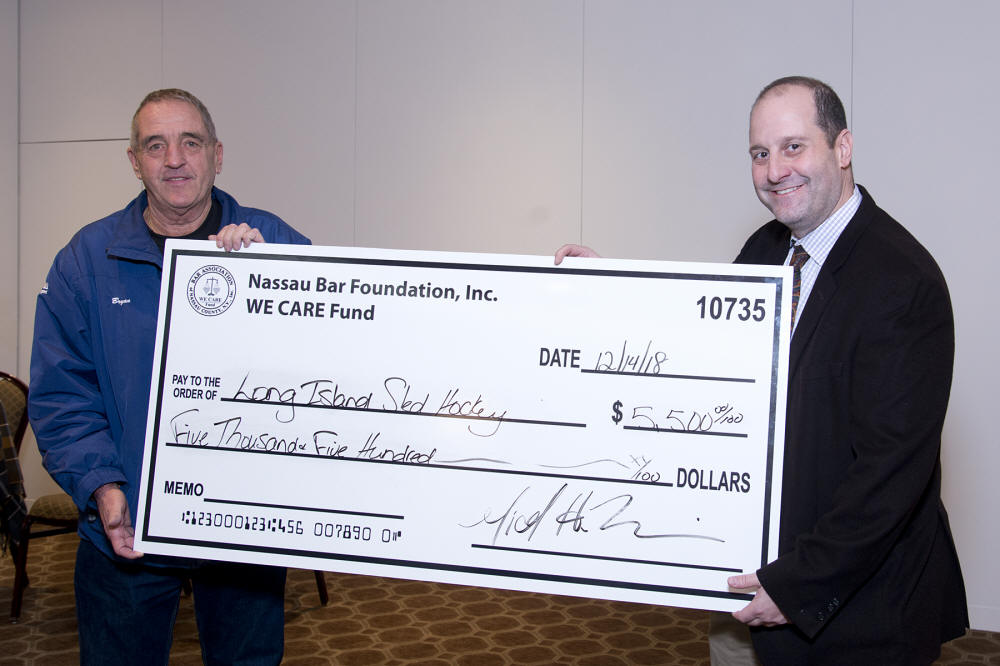 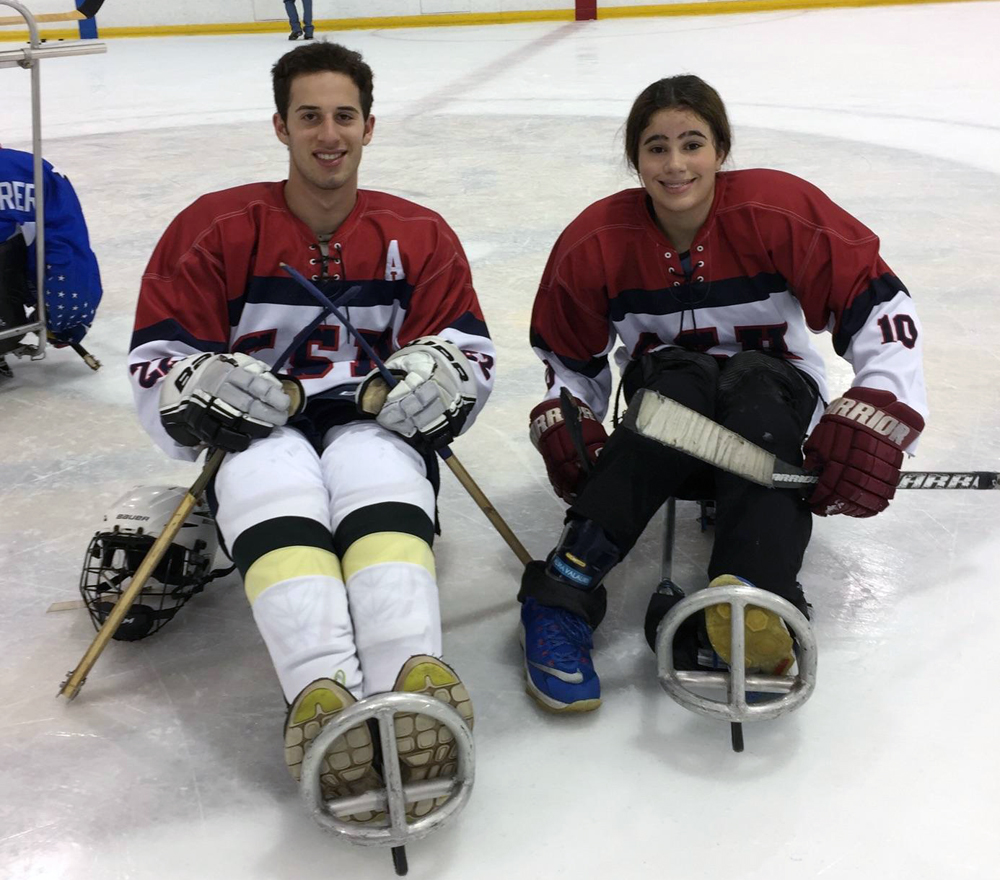 May 13th, 2017 - with the official season over, the RoughRiders played the third annual contest against Nassau County high school's best hockey players, lead by Matt Rossman (left), as he once again surpassed the prior two years in HIS fundraiser against the RoughRiders.  Organized and coordinated throughout by this Tulane-bound high school senior, he raised over $4000, bringing his three year total to over $12,000!!!  He is pictured here with 12 year old Alivia Valauri, highlighted below.  Truly amazing!!!  They are both unique and forever members of the RoughRiders family. 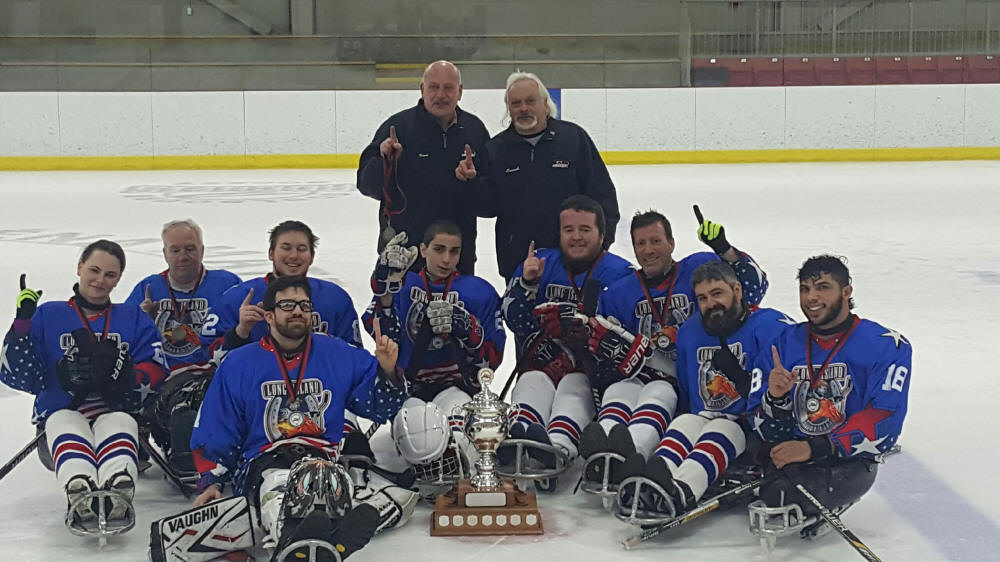 April 9th, 2017 - Ottawa, Ontario - losing their captain after the first game to illness, this spirited and talented eight-player squad, won four more games, going undefeated for the weekend, capturing their fourth O'Keefe Cup Championship, their first since 2014.  Kudos to all for a phenomenal and unbelievable job!!! 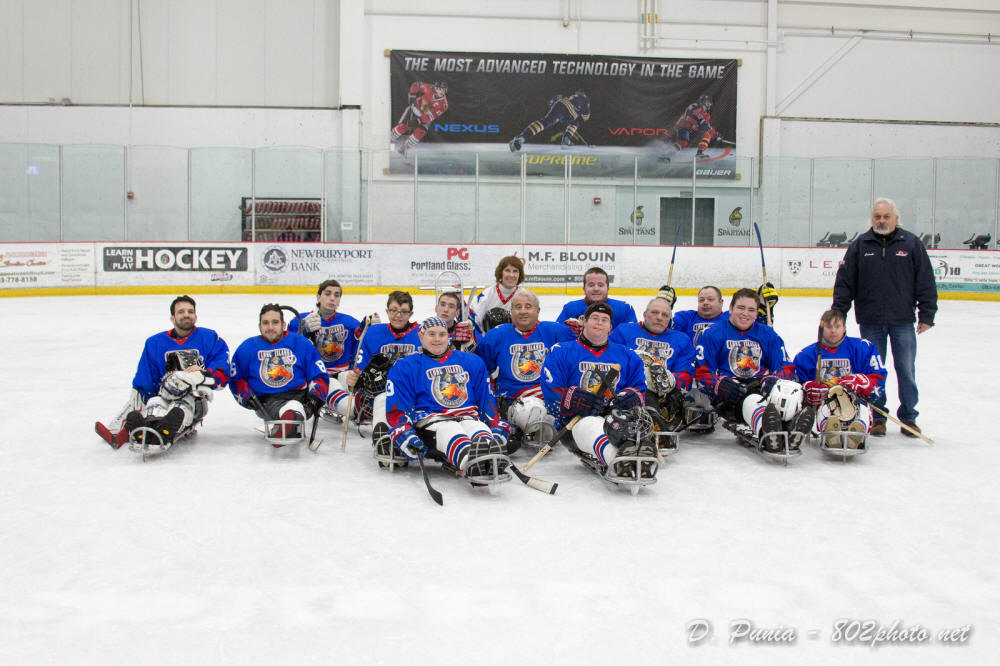 The Nassau Bar Association, Inc.'s WE CARE Fund, presented LI Sled Hockey's president with a check for $3500 for equipment, adding to their earlier donation of $2500. In so, they have become our fourth Corporate Sponsor (see our Corporate Sponsorship page) and we thank them for their commitment to our special athletes.  Pictured here with LISH president Bryan Blomquist are WE CARE Co-Chairs Ms. Sarika Kapoor (r.) and Marc C. Gann (l.) 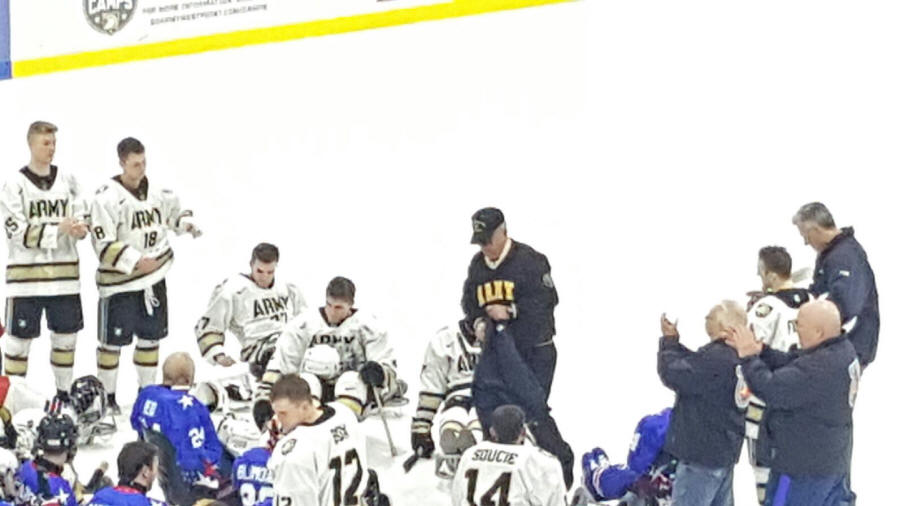